On April 20, 2017, the Tri-Cities Chamber of Commerce held their all candidates debate at Inlet Theatre in Port Moody.  In attendance were Don Barthel (BC Greens), Rick Glumac (BCNDP), and Linda Reimer (BC Liberals).  For those interested in reviewing the entire debate, here is the link to the complete video.  I’ve taken the liberty of clipping the video in order to highlight the performance of the current incumbent BC Liberals MLA Linda Reimer.  I will let Linda in her own words relate her perspective on Health Care Privatization (see below),

and her views on Riverview, the Downtown Eastside, and the Fentanyl Crisis (see below).

These comments caused quite a stir locally, Provincially, and Nationally inspiring a number of media articles (see here, here, and here) and a statement from the BCNDP asking for a clarification of her comments. 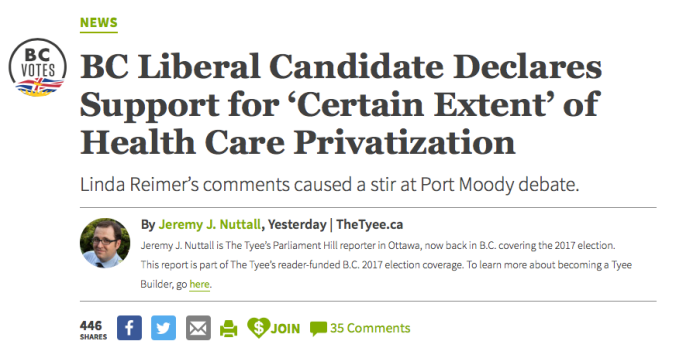 and caused quite a reaction on social media (see below). 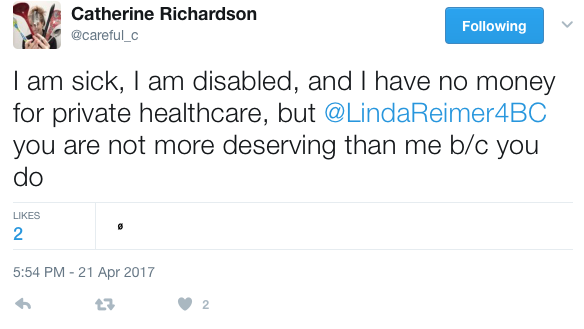 Moreover questions were also raised about the figures regarding health care that Ms. Reimer was bandying about.

Unfortunately, neither of the clips above or her overall performance during the all candidates debate go anywhere to dispelling the perception perpetuated by her actual campaign video and this portion of it specifically (see below) (whether rightly or wrongly acquired), that she is entitled, out of touch, and only representative of a very narrow segment of the population (as previously discussed in the post BC Liberal MLA Linda Reimer On Tolerating Those Less Fortunate).

Her own words say everything.  No further comment required.